Beyond the CSA: Four Ways Communities Support Everything from Books to Beer

Since the first community supported agriculture program was established in western Massachusetts in the 1980s, the concept of buying food directly from local farms has taken off. There are now thousands of CSAs across the country. It’s a simple enough model—consumers purchase a share of the season’s harvest upfront, and they get a box or bag of fresh, locally grown produce each week from the farm.

And this model is not restricted to farming. In recent years, people have applied the CSA idea to other types of goods and services such as dining out, microbrews, and even fish. It’s a system that works for both producers and consumers. Here are some of our favorite examples.

According to the Brewers Association, there were nearly 1,500 microbreweries in the United States in 2013, a 23 percent increase over the 2012 count. As craft beer becomes ever more popular, some breweries have adopted the farm CSA model to offer customers exclusive access to their favorite local brews.

By purchasing a CSB share, you get to take home a specified quantity of beer at regular intervals, usually monthly. You are directly purchasing from the producer, thus creating a relationship between creator and consumer. CSB memberships typically offer six- or twelve-month options and include additional benefits like discounts and members-only events.

It’s a system that works well from a brewery’s perspective too. “For a small producer, you get money upfront that you need to buy ingredients and packaging, you know what people want ahead of time (in some instances), and they come and pick up the beer themselves,” explained Page Buchanan, owner of House of Brews in Madison, Wis., in an email. “So, it solves the challenges of knowing what to make, buying the raw materials to make it, and then distributing it to the end consumer. It’s very efficient.” 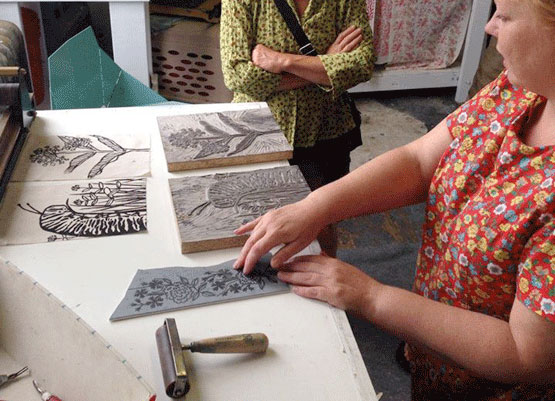 Similar to farm-based CSAs, this exchange program connects people to local producers, but instead of taking home a basketful of fruits and veggies, shareholders receive a collection of local artwork. And just as the type of produce in a farm share changes, the type of art varies with each batch, depending on which artists contribute.

Commissioned artists create a specified number of pieces, usually around 50 or so, which is the number of shares available for purchase. Each share typically consists of one piece from each of the participating artists and costs anywhere from $50 to $500. Shares are distributed through a series of “pick-up parties,” allowing patrons the opportunity to meet artists in their community.

Art sharing programs have cropped up all over the country in recent years. The idea for community supported art was developed five years ago by Minnesota-based art organizations Springboard for the Arts and mnartists.org. Now there are roughly 40 CSAs based on the Minnesota model in cities nationwide, from Philadelphia to Miami to Jackson Hole, Wyo. Although the specifics of each program vary, the basic premise remains the same—strengthening the tie between art and community by connecting people with local artists.

“It’s about creating those connections directly between the artists and the shareholders,” said Andy Sturdevant, Artists Resources Director at Springboard for the Arts. He was involved in organizing the first community supported art program and said he borrowed the idea directly from the successful farm-based CSAmovement.

“It’s a model people already understood,” he said. “People like to know where the things they buy come from, whether that’s food or whether that’s artwork.”

Purchase a community supported medicine share, and instead of cucumbers and squash you receive a mini herbal apothecary filled with all-natural products like dried herbs and spices, tea blends, tonics and tinctures, and skin salves and oils. Contents vary depending on the season.

Again, the idea is to connect consumers directly with producers, and in this case the result is a mutually beneficial relationship between local herb-growers, medicine-makers, and people in the community. Forgo big pharmaceutical companies and instead invest in herbal, organic medicine that comes from the farm down the road—what could be healthier than that?

The CSA model has ascended into the literary world with the rise of community supported publishing. Offered by a handful of small, independent publishers, a CSP membership gives patrons a steady supply of books and other publications hot off the press. South End Press in Cambridge, Mass., offers CSP subscriptions (starting at $20 a month) that provide members a monthly batch of all new material and select backlisted books and publications as well as a 10 percent discount on everything else. Pretty sweet deal. [Update: As of Summer 2014, South End Press has closed for business].

The Head & The Hand Press in Philadelphia also runs a CSP program. According to The Head & The Hand website, “For an upfront annual investment from our shareholders, we produce bi-annual shares of our creative work including our novels, our almanacs, our chapbooks series, and other offerings created in our workshop. We will also offer our shareholders exclusive insights into how the work was produced, plus access to our offerings before they hit the street.”

Small publishing companies are trying to tread water in the precarious publishing business. Supporting smaller players through a CSP share can make your reading habit sustainable for all parties—authors, publishers, and readers.