The Power of Living Life with People to Improve Their Lives

She’s not talking hypothetically. She’s talking about a messy, hands-on, practical form of community development she and her roommates — Kendra McLaughlin, Celine Chuang, Jenna Wood and Carlin Wilters — live every day, as the creators and residents of a community house called Casapluma. 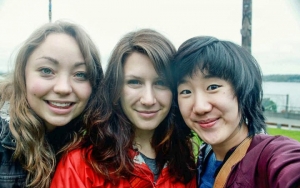 We’re talking a few days after a poverty and inequality conference Evangeline co-ordinated on October 17-18, called Love the City. It brought together more than 80 dedicated people from Calgary’s faith and secular communities.

The goal was to share their best ideas and resources. Evangeline, Kendra, Celine, Jenna and Carlin’s best idea may be the one they live.

Casapluma is a group of friends living in a Calgary Housing subsidized unit that serves as a community hub for their neighbourhood. It’s a resource for people who are already resourceful. The group, who refer to themselves tongue in cheek as “casaplumadoras,” use their home and everyday relationships as a way to connect and enhance the lives of the families around them.

It’s long-term, informal, unpredictable and alive, in a way official programs can never hope to be.

Opportunities, inspirations and answers that make a difference in people’s lives come up in conversation, in interacting with kids, in neighbours from different cultural backgrounds discovering what they have in common at a shared meal or a single mom spa night.

“The idea of the community house is that you come from a place of trust first. You come from knowing the people,” Evangeline says. “And then you’re able to use this house as a way to connect people, so they can find alternatives to the more formal programming — to fix their needs or to find solutions to their problems.” 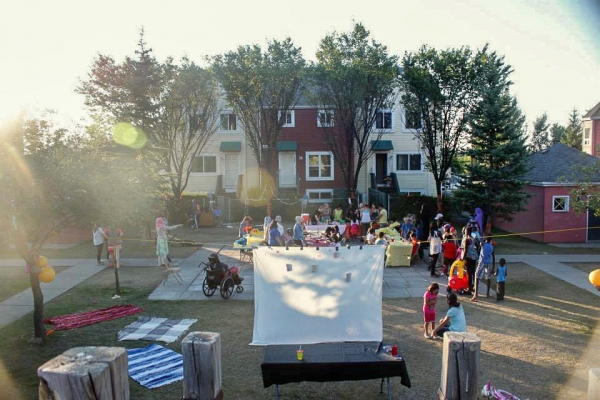 Community houses are an approach that’s based on respect for the capacities people already have, and giving them space to take control over their own decisions.

The creators of Casapluma describe their participation in it as part of a much bigger movement of people looking for new rhythms and structures of living, and wondering how their lives can relate to the well being of communities.

Official programs and social organizations are an essential part of what Casapluma does — and have been supportive of it — but they have their limits. Poverty programs. Housing programs. Programs for immigrants. People come to them to get services, and then they leave.

The relationships are institutional, and always getting services from everything can be very disempowering.

“You’re not giving. That’s kind of the weak point of so much of the social programming that we have.”

Casapluma means “house of feathers,” a name meant to suggest both freedom and sanctuary. The approach has deep roots in Christian activism.

Evangeline mentions Dorothy Day, the best-known founder of the Catholic Worker Movement. The movement gathered strength at the peak of the Depression in the 1930s, opening “houses of hospitality” in areas where they were most needed, advocating nonviolence and voluntary simplicity and opposing inequality.

There are still more than 200 Catholic Worker communities in the Western world. Dorothy Day is (controversially) being considered for sainthood by the Catholic Church. 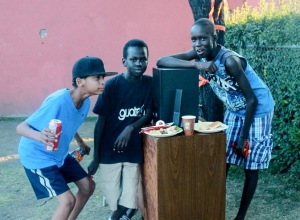 The group has also been inspired by The Simple Way, an intentional Christian community in inner city Philadelphia that is closer to Evangeline’s own religious roots. It has helped to spark intentional living as a way to reduce poverty in many places.

The Simple Way was founded by Shane Claiborne, activist author of books including The Irresistible Revolution: Living as an Ordinary Radical. Simple Way members commit to living among the poor and sharing individual resources with them.

The creators of Casapluma make no big claims for it. Evangeline calls it “a development model that we’re still totally experimenting with. We’ve only been there for a year and a half.”

She does say that the group is “seeing very, very cool things happening” around it — some of which New Scoop will be reporting.

Casapluma’s ideals include creative resourcefulness, working from relationships, and a belief that there is a meaningful role for every person in the community.

“Don’t call me a saint,” Dorothy Day was often quoted as saying. “I don’t want to be dismissed so easily.”

Ben Wolfe
Ben Wolfe is a Generative Journalist with Axiom News. He has 25 years of experience in writing, editing, design and publishing in the service of community-building and social change. Ben is a past director of communications of national and local non-profits, a co-founder of Peterborough Green-Up, a hands-on, solutions-oriented local environmental action project now in its 23rd year, and a winner of a number of communications awards.