Mike McGrath describes an innovative model for civic engagement in this blog post for State of the Re:Union. Clearly, Tim Dutton of SCOPE (Sarasota County Plans for Civic Excellence) really gets what a citizen is and uses his offices to promote their productivity. What could you do with your neighbors to be more productive?

I’ve been working on revisions for a new version of the Civic Index, a tool created by the National Civic League to help communities assess their civic strengths and weaknesses. In the process, I’ve been looking back at some of the best examples I know of communities doing innovative things with civic engagement.

In general there are two approaches to local public engagement. One is to convene temporary deliberative processes to do strategic planning, issue-oriented dialogues, conflict resolution or problem solving initiatives. Another is to embed public participation processes in local government with permanent neighborhood councils or other structures.

In Sarasota County, Florida, local officials and philanthropic leaders found a third way. Concerned about the negative and unfocused nature of discussions over a controversial bridge project, they decided to form a nonprofit to handle the county’s public participation and dialogue strategies, SCOPE, Sarasota County Plans for Civic Excellence.

“Government tends to do certain things well,” noted Tim Dutton, SCOPE’s executive director, when I interviewed him in 2009. “Encouraging people to engage in rich dialogues has tended not to be one of those things. SCOPE can help out a little bit here because we’re not the government. We are being asked by government to convene around issues now, because we can create an invitation that has a different reaction than what happens when government makes the invitation.” 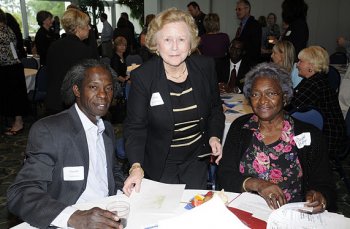 Interestingly, SCOPE studies and summits have led to the creation of nearly a dozen nonprofit spinoff groups to work in different issue areas, including a community housing trust to buy housing that can be preserved as affordable. A conversation/study on school attendance got the local school district to change the way its handles its dropout policies, and a group of mental health organizations launched a $9 million initiative focusing on children.

Additionally, the organization undertakes what it calls community report cards, looking at a number of indicators that reflect different facets of community life. In 2008, the report card led to the convening of a summit for Environmental Action.

SCOPE was one of the organizers of the Grassroots Leadership Initiative, an effort to identify and develop leaders from under-served communities. One graduate of the program joined the country housing authority board. Another became a PTO president. One became a program associate at a local foundation.

We now talk in terms of what we have to do to grow active citizens.

SCOPE has helped change the way citizens and activists think about community solutions, said Dutton. In the early years, recommendations from the conversations tended to produce documents that began with the words, “The County should do….” “We now talk in terms of what we have to do to grow active citizens,” he explained. “How can I have the capacity to make a difference in my own neighborhood? At best we are looking at government being an active partner.” 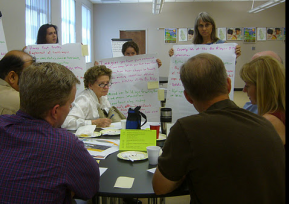 Today SCOPE receives funding from three area foundations, Sarasota County and (to a smaller extent) four municipalities, the United Way and various groups and individuals. It was one of the three projects the county listed when it was named a finalist in the 2008 All-America City Awards.

At the NCL, we think it is important for communities to convene citizens in large-scale efforts to do problem solving or planning, so people can be engaged in local issues year-round, not just on Election Day. Sometimes we help them do it themselves through our Community Success programs. Often we work with local government officials to kick start a project.

But these days city funds are tight and more and more communities may need to find new ways to finance and organize ambitious civic engagement projects. SCOPE could be an interesting model for other communities.

Counties, towns and cities throughout the United States are finding that more traditional ways of governing and garnering public participation are no longer as effective as they once were. We as an American public are growing more concerned — and, consequentially, more aware — about things going on in our communities. Therefore, there no longer resides an easy willingness to accept that which does not work anymore. That being the case, what are some of the ways your community is changing to make local government work for the good of the people? Use the box below to brag on your civic and civil growth.

Or answer the question John and Peter ask in their introduction to Mike’s post:
What could you do with your neighbors to be more productive?

Photos courtesy of scopexcel.org. Re-posted by permission from State of the Re:Union.

Mike McGrath
Mike McGrath is senior editor and chief information officer for the National Civic League. A former newspaper reporter and magazine writer, he is editor of the quarterly National Civic Review, which will be beginning its centennial year of publishing this spring. He writes regular blog posts for State of the Re:Union.

The article below concludes Nonprofit Quarterly's series—Narratives to Build Collective Economic Power—which NPQ is publishing in partnership with the national racial...
Latest Thinking

Losing by Playing the Blame Game