It is not difficult to distinguish the functions of physical tools from each other. No one uses a saw to drive a nail into a piece of wood. Likewise, no one attempts to cut a piece of wood with a hammer. One can readily see both the parts and functions of these tools. They can be used to build a house.

There are also social tools. Two of these tools exist in every neighborhood. They are the local institutions and the associations. Both are composed of groups of people. They differ in that people in institutional groups are paid for their work while associational groups are not. The two social tools also differ in structure. Institutions are usually graphically represented as a triangular hierarchy: 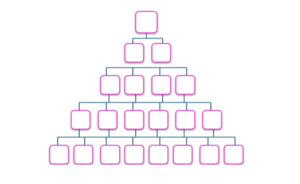 Associations are often graphically represented by a horizontal circle of members:

These two tools help build communities rather than houses. The work that each can do, like a saw and a hammer, is quite distinctive. This is because of the nature of their unique structure and resulting practices.

Associations, both formal and informal, have three practices that are inherent to their structure. The first is that they are groups that gather face to face. This creates a personal culture. This contrasts with the institutional culture where the personal is replaced by the professional role where one in not supposed to “become involved with their client.” Also, a significant reason for having institutions is to depersonalize functions so that the institution can continue on regardless of the person who holds any position. This institutional depersonalization is central to the continuity of the institution which places structure over personalism.

The second aspect of the associational culture is practices that create intimacy. The Latin root for intimacy is “making know from within.” It is the knowledge of the perspective and values of the other members. This knowledge is the assurance that the unique voice and intention of each member is heard. It is often created or enhanced by the experience of the association’s collective decision making and the mutual work that results.

The value of intimacy is rarely studied by people seeking to earn an MBA. Instead, intimate relations are often seen as irritants, problems and barriers for institutions. When the unique assets of employees become “known” and manifested, the result is seen as an institutional problem. For example, consider leaders of automobile companies. They have no use for intimate knowledge of the unique assembly line worker. And certainly, they do not want the workers uniqueness to become behaviorally manifested. Instead, they want the potentially unique “intimate worker” to place the same bolts on the same bolt heads so that the automobile tire will be secure and not fall off. They want to have this work done repetitively and exactly. Their culture is not about intimacy. It is about standardization – the opposite of the uniqueness of the worker.

The third associational practice is maintaining the right size. Here, the rule is “small is beautiful.” Beyond a certain number of members or participants, personalization and intimacy begin to fade away. This is because the possibilities of “knowing” personally and intimately about the other members becomes literally impossible at a certain scale. In a room of 50 people is it nearly impossible to be personal and intimate. In a room with 15 people we can be personal and intimate. The appropriate scale for effective associations occurs when each member can know the other personally and intimately so that the unique gifts, skills and knowledge can be “known” to all.

On the other hand, the institutional assumption is that “bigger is better.” “Scaling up” is the goal. “Scaling up” means we have decided not to be personal or intimate. Big is necessarily impersonal.

They precede trust. They are the nest from which trust is hatched.

There is a reason that trust is generated associationally rather than institutionally. Institutions are groups of people held together by money. Trust is not required. For example, universities are institutions often described “communities of scholars.” However, the day a university stops paying the scholar that community will disappear.

Associations, on the other hand, are groups of people who are not paid. They are held together by trust, the glue that holds society together. Within society, associational life is the primary trust builder because of its three practices that manifest a trustworthy society.

Some scientists study the stars, and that is good. However, in his book, Democracy in America, Alexis de Tocqueville, the great chronicler of America society reminds us that the science of associations is the “mother of all science.”

Associational science reveals the nature of our nature and the trust that protects us from polarization.