Gluing a Place Together, One Neighbour at a Time

The Highlands neighbourhood lies in northeast Edmonton, Alberta, Canada, overlooking the North Saskatchewan River valley. It’s a mature neighbourhood of Foursquare and various Arts and Crafts style homes, large lots, big trees and beautiful river views, all close by central Edmonton. Annexed by Edmonton in 1912, the area “was named in a contest offering a 50-dollar prize.”* The neighbourhood has a wide socio economic and age spectrum.

Today Highlands is the site of Phase One of the pilot for the city’s Abundant Community Initiative (ACI), intended to build the social fabric of Edmonton neighbourhoods.  This city-wide Initiative was inspired by John and Peter’s book, The Abundant Community, and as such its overall objective is to provide a framework to build in Edmonton neighbourhoods “collective efficacy”.† It specific objectives are to interview every household in a particular neighbourhood in order to: 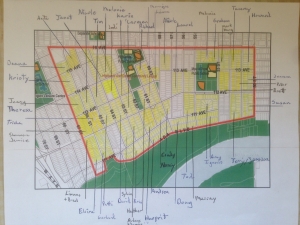 Currently the City of Edmonton is planning the second phase of the project in three additional neighbourhoods which represent the city’s other major urban and suburban neighbourhood types. The city will use Highlands’ experience, research, training materials and interview questions to help other interested communities to launch their own efforts.

Highlands is a place where people know their neighbours, watch out for each other, take pride in their community and enjoy many opportunities for social, educational and recreational interaction.
The Abundant Community Initiative has served to form more groups in the neighbourhood and greater relational connectedness on individual blocks. The idea is that these groups form up on the basis of the actual interests and gifts of the neighbours in the community. The challenge is that they don’t generally know what each other’s interests and gifts are.

So, the ACI Pilot program has asked that people join with a neighbour or two to find out what the interests and gifts of the approximately twenty households on their block are. A “Neighbour Conversation Guide” has been used to get at these through a casual twenty-minute interview.

Already the data is being collected and collated into neighbourhood building lists, which range from the “vision of neighbours to guide in neighbourhood decision making” (for example, safety, senior care and  a grocery market) to neighbours’ activities and interests (such as walking, basketball, photography) to their skills and experience (think: senior visitation, youth mentoring, snow shoveling, writing, yard care).

The invitation for neighbours to participate in the ACI Pilot riffs on some of the ideas John articulated in a blog post titled Gifts, Skills, Interests and Passions: The Glue That Holds Communities Together:

Whenever a neighborhood comes together in powerful and satisfying ways it is because two things have happened.  First, they have found out about each other’s gifts.  Second, they have made new connections based on these gifts.  It is the sum of these connections that “glues” a neighborhood together.

* From the neighbourhood description in the City of Edmonton Map Utility.

The Common Good podcast is a conversation about the significance of place, eliminating economic isolation and the structure of...
Latest Thinking

Do You Want to Experience True Liberation?