Ian Edwards is nervous about the world he’s leaving his 14-year-old son, particularly the divisiveness he sees happening at an increasingly disturbing rate with all kinds of people.

“It seems much greater than when I was younger,” the Boulder, Colorado resident tells Axiom News, noting his wide travels as a business consultant have only sharpened this sense.

Ian, 57, says he wants to be able to offer more than clucks of sympathy when his son, 20 years from now, asks what he did in response to this darkening scenario.

“I want to say, ‘This is what I did. I went to events and studied with Peter Block and found people who were working on this and trying to make a difference.’

“I just want him to know I didn’t sit back.”

Speaking with Axiom News about his experiences with an atypical gathering last year, a three-day mix of lectures from thought leaders Peter Block, John McKnight, Walter Brueggemann and Peter Koestenbaum, as well as small-group conversations, Ian says he believes such an event offers one way to counter the global divisiveness.

The aspect of the gathering, known as Connecting for Community, that’s worked on him most and in which he sees the greatest promise is the three-person conversation, shaped around a set of deep-stirring questions.

“Peter and John and the crew helped me realize that that space is needed for two things — one is the creativity that comes out of it and the other is the relationship of trusting — to really open up with that human being in front of me that I wouldn’t normally go to dinner with, who isn’t my neighbour, to a totally different way of seeing and hearing.”

“If I can absorb (what they bring) my mindset gets bigger and I have more awareness, and then I have more choices in the world. I think that’s the point, is more choice comes out of this,” Ian says.

It’s an experience that’s black on white with mainstream conversations in politics and media, for instance, where groups of people are wild-eyed about convincing others of their viewpoints. Whatever the highly charged topic is, people get aligned to one place and the conversation does not go anywhere.

It’s also counterintuitive in the business world with its “maniacal focus” on coming up with solutions that yield measurable results — fast. 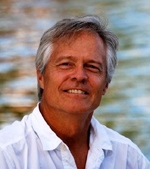 If only people would slow down and open up and allow for voices of creativity to emerge, such as this gathering did, all the while, and perhaps most difficult, living in the anxiety that this process produces with the “seeming divergence from solving, and sometimes sense of being unproductive,” Ian says, noting he can come to trust the outcome will be new possibility that “we could not see before the process.”

Ian refers to this as a third way, ways one and two being “the right” and “the wrong,” and he says he sees great possibility in infusing it into community gatherings already taking place to address local issues.

He, himself, has been bringing the process to his work.

There are “enough of us that are worried about where we are headed,” Ian says in conclusion. 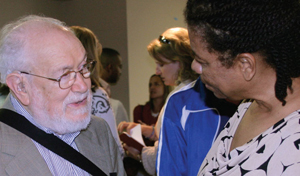 People want to come together and be compassionate human beings and advance the planet in that way, and this process that Peter Block and others are teaching is a way for them to do that.

Ian invites people to consider which path they are on, to reflect on whether they are contributing to the divisiveness or working towards bringing people together in a meaningful way where “we start healing this planet together.”

“Something has to change, and I see this as an antidote to the illness, the virus that has swept us and now people have to wake up and choose.”

“To not do anything is also to choose,” he adds. “And a choice-less path isn’t going to help the world.”

For information on a similar gathering taking place this year, click here.

If you liked this story, check out:

Reposted by permission from a series of articles on Connecting for Community by Axiom News.