What space do we need to create? Is it necessary to retreat from the world in order to give most fully of ourselves to a world yearning for our gifts?

For over ten years, the musician and lyricist who has most enthralled me years is Nick Cave. He and his band’s work has always echoed something in my soul. Their sounds and literary-quality lyrics draw me in with a richness and bursting intensity of imagination, covering a vast expanse of tone and topic from the harshest of dark and diabolical (including an entire album of murder ballads) to the peaks of full joyfulness, achingly tender, and awe-struck transcendence.

Others seem to agree. Although they seem to have achieved an peculiar standing as globally beloved yet still fundamentally underground, mostly out-of-sight in popular cultureOriginally from Australia, Cave and band the Bad Seeds have been described as “one of the most original and celebrated bands of the post-punk and alternative rock eras in the ’80s and onward.”

I admire Cave as a creator. In his output, he achieves something I aspire to in my own efforts at community-building, artistic pursuits, relationships, and general way of living: an authenticity and invitation to presence, to real connection with life and all it means to be a human among humans.

So, I was keen to see how Cave responded to Brian from Shakopee, Minnesota, whose question appeared in the recent entry #192 of Cave’s “Red Hand Letters” (a blog and newsletter of letters between him and people who love his work):

“I understand from having seen 20,000 Days on Earth that you keep an office separate for your creative work. Do you have any recommendations on how I can create a sacred space that allows me to go in and shut the door and lock out the world?”

I suspect that Cave’s response may be of use anyone seeking that “best way” to give most fully of ourselves to a world so yearning for our gifts:

For most of my creative life I did indeed maintain an office at home. This office, with its massive desk, typewriter, shelves of books, and its accumulated piles of artefacts and self-absorbed scribblings, I considered to be my ‘sacred space’, a fortress where I could shut the door and lock out the world. But in time this office, my retreat, started to become a place of exclusion or of hiding, a place where I could turn away from the world, under the guise of being creative, at the expense of all else.

In 2019 I gave my office – the desk and the entire contents – to the Royal Danish Library in Copenhagen for the very beautiful Stranger Than Kindness – The Nick Cave Exhibition.  My office is currently in Montreal as it travels the world with the exhibition.* Handing it over was one of the things that allowed me to find my way back to the world. Giving up my office helped set me free.

I came to understand that the sacred space is the imagination itself, or rather the time spent inside the actual idea – the song you are composing, the story you are writing, or the picture you are painting. The sacred space, for the artist, is within the creative flow, at the crucial and fiery point of artistic intention, where time suddenly contracts and the work finds its power and its groove. My sacred space became the rolling fire of the imagination.

But, you know, these days, I wonder about this too. Maybe these lofty claims about the imagination are yet more artistic hubris, a further place to hide, like the office – another invented way to separate ourselves from the world. Perhaps, the sacred space is simply the world itself – a hallowed place where we all exist at this time, where we engage with life in all its many tempers, within the present moment. Perhaps the thing we have spent so much time escaping, or attempting to create, was there all along – the blessed space, the sacred space, the truly creative place – the world around us. 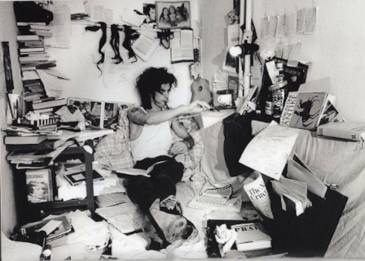 The Sanctum by Bleddyn Butcher
* Pictured above.
Originally published on The Red Hand Files.

April Doner
April Doner is a community connector, artist, and mother who is passionate about igniting the intersection between re-weaving neighbor relationships, strengthening local economies, and healing / reconciling inequities and injustices. She is a Steward at the ABCD Institute DePaul University and, while not practicing neighboring in her own neighborhood, she trains, coaches, and consults in Asset Based Community Development. April also documents local resilience as well as group processes through various creative means including writing, photography, video, and graphic recording. Since 2020, she has curated content for AbundantCommunity.com.