More than a little buzz was created last fall when a story on an unusual restaurant in Norwood [in Cincinnati] aired on National Public Radio’s Weekend Edition Sunday. In fact, the local restaurant featured in the report is so unusual the story was picked up all over the country, and Moriah Pie went from being virtually unknown outside of Norwood to somewhat famous.

The small pizza café actually become the subject of bloggers and social media users, who lamented they could not ﬁnd anything about it on the Internet — no website, no phone number, no email, some Facebook page that wasn’t created by the owners… Folks wanted to ﬁnd this interesting place.  At least on their computers.

So what is so newsworthy about Moriah Pie? One could say just about everything. But what got most people’s attention last fall was that the restaurant serves up delicious pizzas, salads and fruit pies and asks diners to “pay what you can.”

“It’s very humbling,” says Erin Lockridge of the recent notoriety. Erin runs the pizza restaurant with her husband, Robert, and emphatically denies that they are “heroes.”

It is not surprising the cyber searchers could not find information on the restaurant. Its proprietors do no advertising and open only one evening a week (Fridays). They make the foods they serve using only ingredients from the five gardens they have around the neighborhood. They are not at all interested in their establishment becoming the latest trendy place to dine, but rather are focused on serving the people of the neighborhood — those who can afford the market price for a pizza dinner and those who cannot. Not only do they want to provide healthy, local food, they also want to extend hospitality to their neighbors.

Local folks, unsurprisingly, have no trouble finding out about the café. Word of mouth has spread that Moriah Pie is open on Friday evenings at the old Speckled Bird Café at 1766 Mills Avenue.

In terms the Economics of Compassion Initiative (ECI) typically uses, Moriah Pie is a social business, a business started not primarily to make a profit, but one designed to meet a social need. In terms the Lockridges might use, the Friday night café is a ministry to their community. They also call it “an experiment in faith.” The 30-something pair leaned back on their faith to start the café almost 2½ years ago, believing that “God would provide” for them by allowing them to make a living while answering what might be termed a calling. Hence, the name of the café, Moriah Pie, named for the biblical Mount Moriah, where the great patriarch Abraham was stopped from sacriﬁcing his son by God’s provision of a ram for the ritual. Abraham then called that place “The LORD will provide.”   (Genesis 22:1-19)

Provision is a theme that runs throughout the couple’s thinking about  their unusual endeavor. While providing good food and hospitality to their neighbors, they are witnessing to God’s provision, Erin says. By creating meals made solely from ingredients grown and harvested in their neighborhood, they also are pointing to the provision right there in Norwood, inviting diners to “receive the goodness of Norwood.” 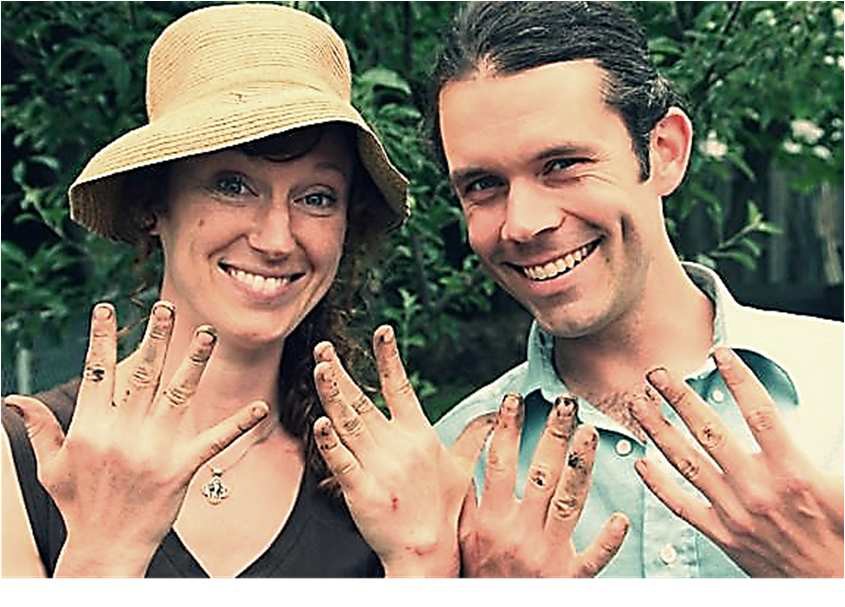 A couple who lives their faith, Robert became an evangelical Christian as a teenager, and Erin is a member of an area Orthodox church. They came to Norwood to be what Robert calls “parish farmers,” with the parish being the Vineyard Central community. While not members of the Vineyard Central church, which owns and meets at the former St. Elizabeth building across the street from the café, they are members of the Vineyard Central intentional community. Many of their friends and neighbors are members of this community, renting and owning houses near the church. One of these friends purchased the old Sisters of Charity Convent, also across the street from the café, and provides garden space to the Lockridges. Some other gardens maintained by the couple are located in the backyards of their neighbors’ homes.

We’ve done our best to keep as much of the cost and value of the pizza right here in the neighborhood. We have chosen to know this cost in our own bodies and in a way that is both restorative of our human and natural communities, and hopefully glorifying to God… we’ve taken steps toward trusting that we may all be fed — and find ourselves truly full —when we together journey deeper into an experience of the honest economics of life. — Robert Lockridge

“Many people have risked a lot on our behalf,” remarks Erin.   “But love is a risk.”

The Lockridge’s gardens grow a lot of tomatoes, onions, garlic, peppers, eggplant and other ingredients for pizza sauce, soups and salads. Fruit from neighborhood fruit trees is the source of pie ingredients. Moriah Pie is also known to serve carrot cake and zucchini bread. At the end of a meal, diners are given a handmade cloth envelope in which to place whatever amount they care to. Some give change; some give what you would expect to be charged in a typical restaurant; some give more.

According to Erin, God is providing, just as the couple believed. With 50-100 people dining each Friday, Moriah Pie is seeing a profit each week, allowing the Lockridges to pay the serving and kitchen prep staff. But in addition to some profit, the couple is receiving other “gifts,” namely the people who frequent the café.

Photos: The Speckled Bird Café (top) is venue for Moriah Pie, owned by Erin and Robert Lockridge (below), faithful gardeners who don’t mind getting their hands dirty.

Text and photos posted by permission from the February 2015 issue of Compassionomics, the newsletter of the Economics of Compassion Initiative of Greater Cincinnati. For more on ECI, go to http://econofcompassion.org/

Lynne Wise
Lynne Wise is the communications director of the Economics of Compassion Initiative of Greater Cincinnati and editor of its monthly newsletter, Compassionomics.