Take a Walk on the Jane Side

Spring is back, so here’s a fresh idea to celebrate the season and discover hidden pleasures in your neighborhood — organize a Jane’s Walk.

Since 2007, thousands of people in more than 100 cities around the world enjoy May exploring nature, culture, history and architecture in their own backyard as way to mark Jane Jacobs’ birthday. 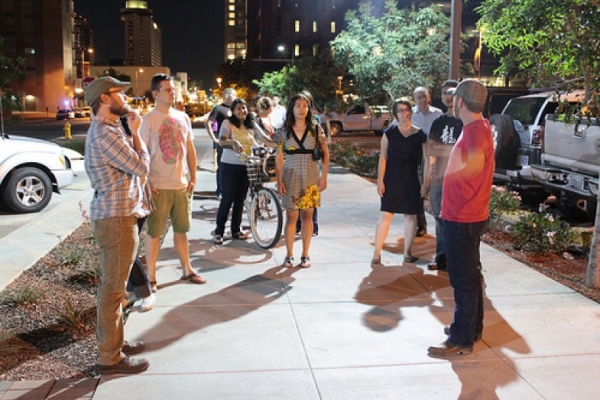 Neighbors explore their community in Phoenix, one of many towns around the world hosting Jane’s Walks in early May. (By David Crummey under a Creative Commons license)

Jacobs, mother of today’s urban livability movement, revolutionized how we think about our communities in her landmark 1961 book The Death and Life of Great American Cities.  Her common sense approach to reviving urban neighborhoods emphasized walkable streets and community connections over massive urban renewal schemes.

Her friends in Toronto — her adopted hometown — organized the first Jane’s Walk the year after her death, and the tradition quickly spread across Canada and then to places as far as Omaha, Madrid and Mumbai.

Organizing a Jane’s Walk is simple, and provides the perfect excuse for getting outdoors in the spring air to research what’s great about your neighborhood. Each walk is initiated by volunteers, who chart an interesting route that shows off the area’s special spots and unique character.  Some Jane’s Walks have focused on specific subjects such as gay and lesbian history, homelessness or urban planning controversies.

You don’t need a history or architecture degree to lead one, just the curiosity to dig around in local events, urban ecology, social issues and your neighborhood’s cultural assets.  Team up with your friends to share your collective knowledge.

Here’s some tips on how to organize your own Jane’s Walk.

I took a tour of my neighborhood in Minneapolis from local historian Tom Balcom who pointed out a row of Victorian houses that once were part of a country estate, a tiny storefront where famed R&B record producers Jimmy Jam & Terry Lewis got their start (they’ve worked with Janet Jackson, Michael Jackson, Prince, Usher, Mary J. Blige and Mariah Carey), and the site where in 1950 a Northwest Airlines plane crashed into three houses, killing 15. Finding out about these places made me look on neighborhood in a new light.

Re-posted from On the Commons under a Creative Commons license. Home page image Vanessa Blaylock.

Jay Walljasper
Jay Walljasper, Senior Fellow at On the Commons and editor of OnTheCommons.org, created OTC’s book All That We Share: A Field Guide to the Commons. A speaker, communications strategist and writer and editor, he chronicles stories from around the world that point us toward a more equitable, sustainable and enjoyable future. He is author of The Great Neighborhood Bookand a senior associate at the urban affairs consortium Citiscope. Walljasper also writes a column about city life for Shareable.net and is a Senior Fellow at Project for Public Spaces and Augsburg College’s Sabo Center for Citizenship and Learning. For more of his work, see JayWalljasper.com

the nights stretch themselves over our harried hearts there’s no differentiation now each day we come apart in new ways at old seams we age...
Stories

The Gifts of Strangers: Understanding the Benefits of Diversity

A Deep Dive into the Art of Neighboring