What’s Possible When Two Women Step Up to Connect Their Neighbourhood?

Amber Cannon feels most energized when she looks back over the last few months that she’s been active in her community and realizes the mental health issues she’s struggled with in the past have lessened considerably.

“Since I’ve been involved with the community, I haven’t had those suicide attempts; I haven’t had those really low moments where I don’t feel a part of my community, that I’m not an active part of society and therefore I should just die,” Amber says. “I’m not having those really horrible days where life doesn’t feel like it’s worth living anymore.” 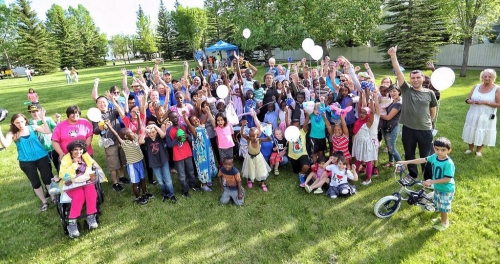 Amber’s first step into bringing her neighbourhood together was a big one: She agreed to organize one of the block parties Mayor Naheed Nenshi called for this year as a way to remember how Calgary residents rallied to support one another after Alberta’s major flood in June, 2013. The gathering was a huge success, attracting more than 100 local residents.

Amber has now come to be known as the voice of her neighbourhood, Lincoln Park, in Calgary’s southwest. 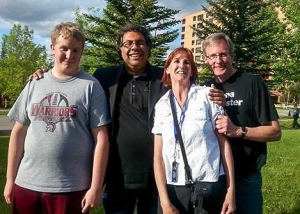 One of her gifts is accepting people for who and where they are in their lives and then discovering with them what they’re good at and encouraging them to share those gifts with the community, Amber says.

She recalls one neighbour who suffered from anxiety and wouldn’t leave her home. Amber learned this resident had some great ideas for games for the neighbourhood event and encouraged her to put them together and bring them to the event. Since then, this resident has been much more involved in the community.

“To see her start to bloom and have faith and hope and a sense of self-respect is wonderful,” Amber says. “I’d like to see that for everyone.”

Amber has found herself working closely with another Lincoln Park resident, Rowena Saballo.

Her love for the community is what energizes Rowena most. “I want the neighbourhood to be a friendly neighbourhood, where we can count on each other,” Rowena says. 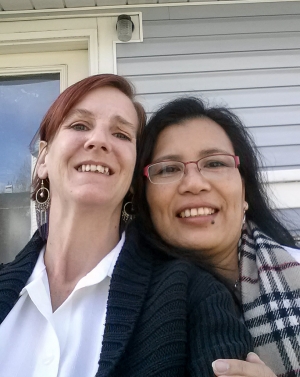 The gifts Rowena sees herself bringing to this work include her warm friendliness, what she calls her “brown skin,” which, in a neighbourhood of varying races can help melt barriers — and her story. “In the community I am very open with them; I don’t keep it secret what happened to me,” says Rowena, a single mother who has come out of an abusive relationship.

“People can look at me and say, ‘She is still standing, this is a strong woman and I can be like that too’.”

Both women credit a local church, Bethany Chapel, as a huge source of inspiration, encouragement and practical support in bringing the Lincoln Park neighbourhood together. The church runs a shop of donated clothing sold for $1 per item. The proceeds are used to support community activities. Once a month, the church hosts a get-together for residents to discuss the kinds of programs they’d like in the neighbourhood. It also offers community dinners. “They’ve really been supporting us in almost everything,” Rowena says.

“Lemlem has been a huge support for our community,” Amber says. “She encourages me to be the voice and set aside any fears I may have for speaking out. Without her, I would likely be in my home thinking those horrible suicidal thoughts.”

“Both women have endured numerous hardships and their efforts to create a strong, safe and connected community speaks volumes about who they are. They are helping to create the kind of community that I think most of us wish we could be a part of.”

Looking ahead, Rowena would like to see more of the connections and support already happening in Lincoln Park come to life.

“I have been here for more than two years now and (we’ve reached a point) where we are calling each other by first names, we can borrow things from each other, we do favours for each other,” she says.

A large part of the work is just getting to know people, listening to them and getting them involved in the community.

A large part of the work is just getting to know people, listening to them and getting them involved in the community.

“People get more friendly and (are) feeling more safe, we know we are here for each other, and I just hope that it will be continue to be like that.”

As for Amber, she cherishes a vision for how the children of her community might live into their full potential.

One of the questions Amber, Rowena and a few others that have come alongside them are currently wrestling with is how to unite those who hail from the more costly housing in the neighbourhood with those living in social housing. One section of the neighbourhood includes housing ranging from $650,000 to $1.5 million. In contrast, residents of the social housing unit could be living off $500 a month.

In a recent meeting, social housing representatives, a local councillor and a community resource officer discussed the idea of painting murals on garbage bins as a way to bring warmth and beauty into the area. The next step is to find an artist who can help work on that.

Photos courtesy New Scoop, a new Calgary news co-op, using generative journalism to explore and share stories of the city. From top: [1] Neighbors gather in Calgary’s Lincoln park. [2] Amber Cannon and Mayor Naheed Nenshi. Amber (second from right) and Mayor Naheed Nenshi (to her left) at the block party she organized after the 2013 flood. [3] Amber Cannon and Rowena Saballo. Amber and Rowena have been described as “powerhouses of community development” by those who work with them.