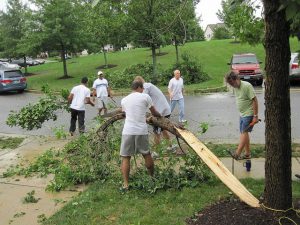 “If there were ever a place for top down systems, it is in disaster response.” That was the observation of a colleague as he explained the ICS — Incident Command System—utilized by most disaster response agencies.

The ICS is pretty top-down. The system was developed in the 1970s when an investigation of a series of urban fires in California showed that death and destruction were not the result of lack of response resources, but rather inadequate coordination and collaboration between them. Emergency response planners developed a single system that allows for efficient and effective coordination between first responding agencies. The system has also been widely adopted by recovery and relief agencies and organizations.

But it turns out not all the chaos is bad. Neighbors running around without an incident commander is essential to rescue and recovery. Social scientists Daniel Aldrich and Michelle Meyer reviewed all the recent research on disaster recovery and tell us that before the coordinated ICS agencies arrive, before the Red Cross and all the other recovery groups descend with legions of volunteers, there are neighbors.

While disaster situations may typically call forth images of trained professionals and formal rescue operations, scholarship has shown that informal ties, particularly neighbors, regularly serve as actual first responders. Neighbors check on the well-being of others nearby and provide immediate lifesaving assistance. Following the 1995 Kobe earthquake, for example, the majority of individuals who were pulled from the rubble of their collapsed homes were saved by neighbors, not firefighters or rescue workers (Aldrich, 2012b; Horwich, 2000; Shaw & Goda, 2004). Following the March 2011 earthquake, tsunami, and nuclear meltdowns, survivors in Japan indicated that many of the elderly and infirm were saved from the incoming tsunami not by their own actions but by the assistance of neighbors, friends, and family (Aldrich site visits, 2014).

Recently we saw a similar phenomenon in Houston. The “Cajun Navy” consisted of hundreds of boats and thousands of volunteers self-organizing and self-coordinating to rescue people caught in floods. People used Facebook and Twitter to call for help and respond to calls when the 911 system was overwhelmed.

The more connected the community before a disaster hits, the stronger its ability to bounce back after disaster hits. Emergency planning people call it resilience. FEMA defines resilience as “the ability to adapt to changing conditions and withstand and rapidly recover from disruption due to emergencies.”

Put another way “Community resilience describes the collective ability of a neighborhood or geo- graphically defined area to deal with stressors and efficiently resume the rhythms of daily life through cooperation following shocks” (Aldrich, 2012c).

We all do better if we are part of a resilient community. Especially after disaster hits.

It turns out, social capital (our relationships, networks and neighborhood trust levels) has everything to do with resilience. There is a whole pile of social science research that shows that social capital is a bigger driver of recovery than income. Well-connected poor communities recover better and faster than wealthier counterparts with little social capital. So much so that after a Tsunami, Japanese officials started setting up “third places” for people to gather and access their networks because the government agencies could not do it all. “Third places” are unofficial gathering places like coffee shops, senior centers, bars and parks.

Even FEMA, the official sponsor of the ICS, encourages social capital development as a critical disaster preparedness strategy.

How does a community create social capital?

Over 30 years of working in and with local communities have convinced me that the best and most accessible way for communities to grow and strengthen their social capital is through Asset Based Community Development (ABCD), a style of community organizing. ABCD refers to resident-driven, locally-focused processes that identify, map and connect community assets in a way that strengthens the community as defined by said residents. As participants and “co-producers” of their future, not as passive and powerless recipients of services.

ABCD is about taking individual and group gifts and skills and turning them into social capital.

Therefore, in addition to organizing a local ICS, the best thing a community can do to ensure its resilience in the face of the Harveys and Marias of the future is to engage in some Asset Based Community Development. And the folks that fund ICS agencies, levees and storm surge barriers would do well to fund a few community organizers to facilitate ABCD work in every disaster vulnerable community. Can you imagine how efficient the Red Cross would be if half the recovery volunteers were from the community that is recovering?

Ron Dwyer-Voss
Ron Dwyer-Voss is the owner and founder Pacific Community Solutions, Inc., a training, consulting and technical assistance company focused on working with community-based initiatives, nonprofit organizations and local governments. His work focuses on asset-based community development and organizing, community engagement and mobilization, participatory evaluation, education, and community health. Since 1982, Ron has been a community organizer, community development corporation director, leadership development coach/trainer and elected school board member. He began working with the Asset-Based Community Development model while organizing on the south and west sides of Chicago in 1991. Since then he has worked with faith-based communities; African-American, Latino and Southeast Asian and Native American and Hawaiian communities; and a mix of urban and rural communities. He also works with youth development coalitions and education-focused organizations. Ron’s education and training has come from both institutions and mentors. He earned a master's degree in planning and policy from the University of Illinois at Chicago and a master's of theology from the Lutheran School of Theology in Chicago. He has been trained and mentored by John Kretzmann and John McKnight, co-founders of the ABCD Institute, for more than 20 years. For the last 10 years he has worked closely with and learned from Mike Green and Henry Moore of the ABCD Training Group. Ron is the past chairperson of the National Community Building and Organizing Initiative of NeighborWorks America, and has provided training in community building and organizing at NeighborWorks Training Institutes around the country. He has trained school board members and administrators on how to more effectively engage their communities in local schools, as well as how to mobilize their communities to advocacy. Ron’s work focuses on helping organizations understand and apply asset-based strategies to community revitalization and community organizing. This means discovering the power within a community and mobilizing the assets of a community before looking for outside resources. Community change is more authentic and more sustainable by working from the inside out rather than simply seeking outside resources to drop in or on the community. Asset-based approaches are also more fun and more sustainable for staff and volunteers as well as residents. Every community has assets from cultural to economic and environmental to individuals. Some of the most rewarding part of this work is organizing or re-organizing those assets to make a stronger community with powerful local leadership.