A Happy Place to Shop

Sixteen years ago the only grocery store in Chester, PA closed. That was the bad news. The great news is that in 2013 the nation’s first nonprofit grocery store opened there: Fare & Square.

Fare & Square is unique, and not just because it thrives as a nonprofit in the brutal retail grocery business. The store’s Carrot Club members earn rewards through in-store promotions, program incentives and special values redeemable on future purchases. Fare & Square listens to its customers and stocks the food they say they want, like Latin American and Caribbean fruits and vegetables, and, as produce manager Nate Sumpter says, not much watercress, leeks or rutabagas. It offers seniors a 10 percent discount on Wednesdays. 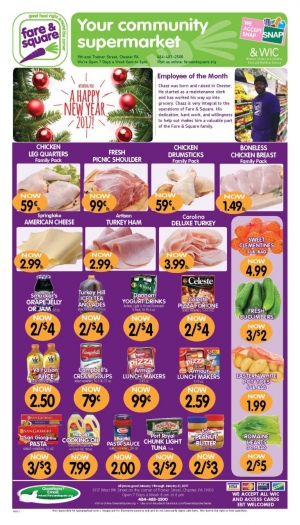 Of course, lots of grocery stores do things like that. But it’s rare to find one that became an oasis in what was once a food desert. Or one that gives food away sometimes. Or is actually trying to change the way people eat.

“Good food for everybody” is the store’s mantra and in less than four years it has made a huge difference in Chester—and not just in the healthy food now available in the community. For example, Fare & Square employs approximately 50 people, three-quarters of whom come from Chester/Delaware County. There is a special membership benefit called Carrot Cash for people who need support in the form of extra money. At checkout, Fare & Square adds a percentage of the total purchase price to the Carrot Club member’s card for use toward any future purchase. The current Carrot Cash Benefits percentage is 7 percent.

Chester is a city of some 34,000, situated between Philadelphia, PA and Wilmington, DE. It has a 13 percent unemployment rate and more than 30 percent of its residents live below the poverty line. Before Fare & Square, more than half of its families were forced to travel too far for groceries, according to a Philabundance Community Survey.

Today, there’s “good food right around the corner,” as the store’s logo proclaims, with a focus on fresh produce, meats, dairy, seafood and frozen foods. Plus, the store’s philosophy and operating principles help stretch customers’ dollars so they get more for their money.