The Westwood neighborhood shared characteristics of many marginalized, disinvested communities in US cities. To confront the challenges, WU sought to discover and build on the assets of the community rather than focusing on only its needs. As a way of discovering the neighborhood’s assets, Westwood Unidos conducted a listening campaign to find out what residents and organizations cared most about and wanted to work on together.

WU’s first director was a white woman who lived outside the community, Rachel Dahlke. She hired three Latinx, female residents as Community Connectors, a critically important role of listening, organizing and empowering the neighborhood. The Community Connectors and Director conducted over 225 listening conversations in the first three months. Through the conversations, WU identified the skills and resources that existed in the community and, most importantly, gained its trust. With this knowledge, Westwood Unidos’ built “from the inside out,” facilitating the leadership of local residents on the projects they themselves had prioritized.

Residents expressed concern about the widespread dumping of trash in alleys, the prevalent graffiti and the overabundance of liquor stores. Residents wanted streets transformed from auto-oriented to walkable, and they wanted a recreation center and safe parks. Many residents also said that they had a skill, such as Zumba or drawing, which they would like to teach to others. Several organizations shared their desire to work in the Westwood community, but did not know what to do or how to find residents to partner with. With WU’s help to connect them with resident partners, these organizations eagerly signed up to co-chair action teams, and provided staff time, training and funding.

Westwood Unidos’ values – Democratic, resident-centered, listening for what to do, uniting, and transparent – guided the work and were communicated upfront to all who sought to partner.

Residents learned to lead meetings, recruit other neighbors to become involved, to do research, conduct planning, and to meet with elected officials and government staff, and they put these skills into practice regularly.

The Westwood neighborhood was 80% Hispanic. Approximately half the Hispanic population was monolingual Spanish-speaking immigrants and the other half were monolingual English speaking US citizens. Meetings were held in Spanish, and an interpreter provided simultaneous interpretation to English. Many participants said that prior to joining Westwood Unidos, they had felt isolated, disenfranchised and frightened, and Westwood Unidos helped them overcome their fear and feel like they belonged.

The Westwood Unidos action teams worked on the issues prioritized by residents. Each was co-chaired by a Community Connector and an organizational partner. The Built Environment action team supported walking and biking, public transportation and housing. The following was achieved between 2012 – 2017:

The Safety Action Team held monthly neighborhood clean-ups, hosted youth activities and advocated for parks and recreation amenities in the community. Norma Brambila, the Community Connector who co-chaired the Safety Action Team, was a powerful community organizer whose deep commitment and vision for her neighborhood enabled her to engage hundreds of people to build power and achieve ambitious community goals. The following was achieved between 2012- 2017.

The Learning Center Action Team connected residents and provided training for instructors who wanted to teach classes with community locations, such as school gyms. Due to the overwhelming demand for programming and lack of reliable locations, the Westwood Unidos instructors redeveloped an abandoned building which became La Casita Community House, an Educational Center where residents teach other residents. Hundreds of residents participate each month. Classes offered have included English, Peruvian Dance, Music for adults and kids, GED, Ballet, Folkloric Dance, Computer, Cardio-aerobics, Personal Improvement, Alanon, Alateen, Make-Up, Nails, Spanish, Zumba, and Counseling, such as help signing up for food stamps. Classes are offered at affordable prices and 100% of the class income goes to the instructor. At the same time, the teachers themselves gain skills in starting their own small business.

Westwood Unidos’ success was due to the trusting relationships with residents and organizational partners. It was very important to hire Community Connectors who were demographically and culturally representative of the community, build on their existing relationships and form new relationships with a common foundation of being neighbors and from similar cultures and backgrounds. As a result of the Community Connectors being monolingual Spanish-speaking, most Westwood Unidos leaders were monolingual Spanish speaking immigrants as well.

Another key was recruiting like-minded organizational partners to help provide resources, structure and support which would have not been possible without them. Each organization contributed immeasurably to the work. The following is a small sampling. Extreme Community Makeover worked with Community Connector Norma Brambila to lead community clean-ups, alley transformations and Safety Action Team meetings. BuCu West helped the community design a plan for the redevelopment of the main street and co-chaired the Built Environment Meetings. The Trust for Public Land acquired land for the neighborhood’s first new park in 30 years, facilitated the design of a re-developed park and greenway and designed an alleyway toolkit to redevelop blighted alleys to community gathering spaces. The Urban Land Conservancy provided funding and technical assistance for neighborhood planning and acquired and redeveloped land for community-benefitting redevelopment. The office of City Councilman Paul Lopez spearheaded the new park, championed the recreation center and partnered to prevent new liquor stores. 9to5 Colorado supported the community organizing for a new bus route and affordable housing. The City and County of Denver provided funding and partnered for economic development, street improvements, graffiti removal, new parks and more. In retrospect, an area of missed opportunity for Westwood Unidos was serving people from more backgrounds. Other races of people in the community included white, African American, Asian and Native American. Westwood Unidos could have created a more diverse coalition by organizing these communities more intentionally, such as hiring Community Connectors representative of these communities and offering interpretation in Vietnames during meetings.

By listening deeply, forming relationships and creating action teams of residents and organizations working together, Westwood Unidos became a powerful coalition led by residents that improved health, physical activity, safety, the economy and quality of life.

As the initiative grew, some tensions between organizations arose. This is natural in an environment with limited funding and much overlap in organizational activities, in which there is no clear boundary where one organization’s influence stops and the other’s begins. Westwood Unidos was able to do the most when the organizations on the leadership team were involved and active in the action teams. As that participation dwindled over time and partners began to focus on their own activities as opposed to contributing their energy and resources to the group, more siloed efforts arose and led to competition for funding and distrust. To avoid this, it would have been helpful to have regular conversations about expectations for leadership team members and to codify them in the by-laws. The purpose of the conversations would be to achieve clarity about how organizations will collaborate, fundraise and communicate the work externally so that each organization, and most importantly the residents, received proper credit and ability to claim the work externally.

Building an organization around the hopes, dreams and motivations of a community’s residents can create long-lasting, transformational change. Prior to the formation of Westwood Unidos, Westwood was a neglected, disinvested neighborhood in which residents were not organized. By listening deeply, forming relationships and creating action teams of residents and organizations working together, Westwood Unidos became a powerful coalition led by residents that improved health, physical activity, safety, the economy and quality of life. 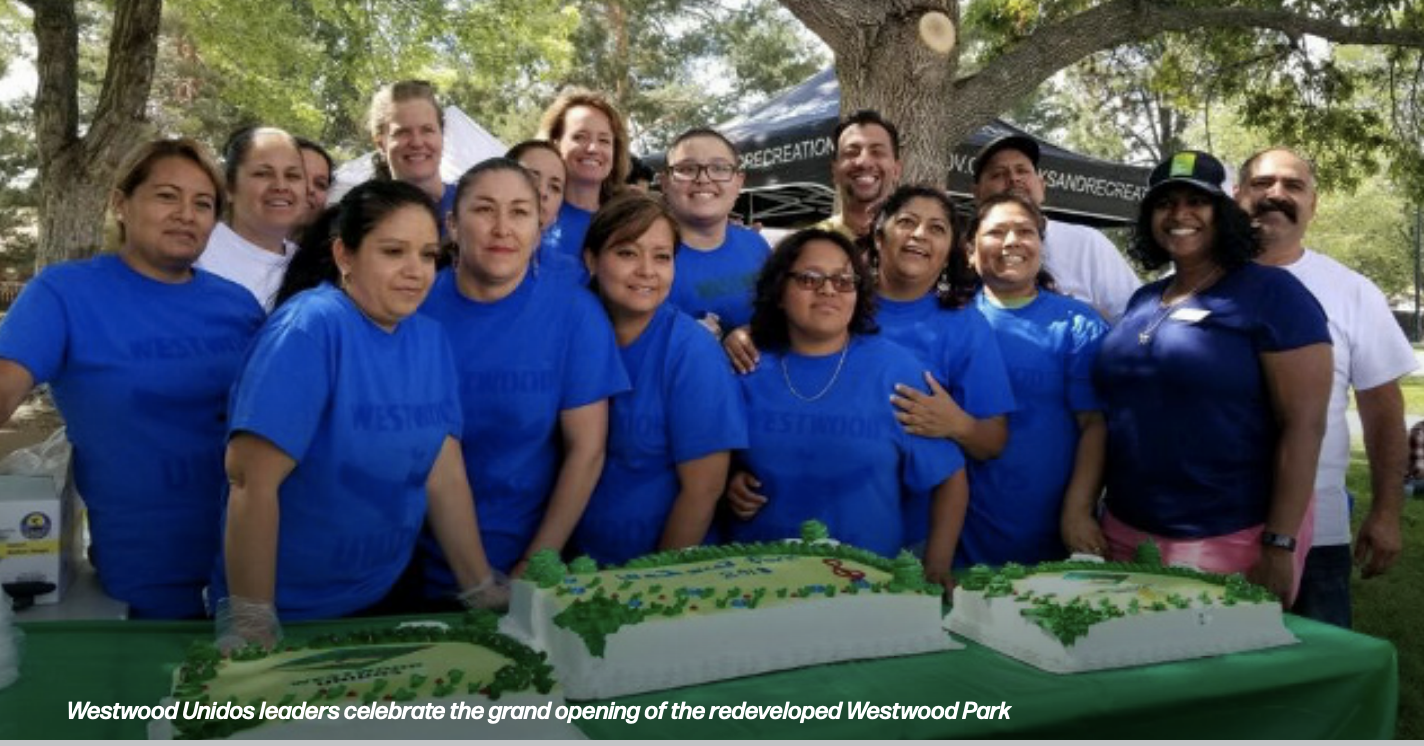 Rachel Dahlkehttp://www.racheldahlkeconsulting.com
Rachel Cleaves Dahlke has eleven years’ experience in community development, organizational leadership, grant writing and communications in the US, Africa, and Latin America. She is skilled at facilitating authentic community engagement and leadership through Asset-Based Community Development. As the Executive Director of Westwood Unidos, Dahlke founded an ABCD movement in one of the most under-served areas of Denver, Colorado. Westwood Unidos utilized community organizers hired from the community to take community-led action that resulted in new parks and park design, new bus service, a youth-led bicycle library, the transformation of blighted areas and abandoned buildings into community gathering spaces, a new recreation center, and a new community center.