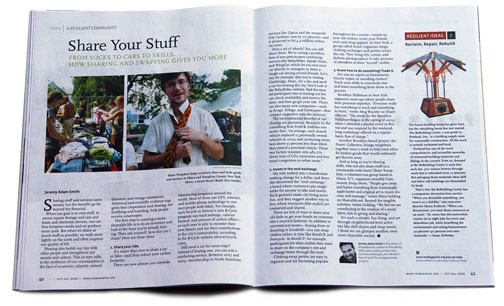 PEEK INSIDE THE RESILIENT COMMUNITIES ISSUE OF YES! MAGAZINE

Sharing stuff and services saves money, but the benefits go far beyond the financial.

When our goal is to own stuff, to amass square footage and cars and boats and electronic devices, our carbon footprint swells and we produce more junk. But when we share as much stuff as possible, we walk more lightly on the earth and often improve our quality of life.

Sharing also builds our ties with other people and strengthens our society and culture. This in turn adds to the resilience of our communities in the face of economic calamity, natural disasters, and energy constraints. Historical and scientific evidence suggests that cooperation and sharing, not fortifying and hoarding, help people survive catastrophe.

The first step to creating a more shareable life is to do an inventory and look at the ways you’re already sharing. Then ask yourself, how else can I share? Here are three ideas:

It’s easier than ever to share a car or bike — and thus reduce your carbon footprint.

There are now almost 200 citywide bikesharing programs around the world. Most of them use GPS, internet, and mobile-phone technology to connect people with bikes. For example, each bicycle in Denver’s new B-Cycle program can track mileage, calories burned, and amount of carbon offset—so each user is able to monitor their own fitness and see their contributions to the city’s sustainability, according to the B-Cycle website (denver.bcycle.com).

Still need a car for some trips? Instead of buying one, you can join a carsharing service. Between 2007 and 2009, membership in North American services like Zipcar and the nonprofit City Carshare rose by 117 percent—and is projected to hit 4.4 million within six years.

Still need a car for some trips? Instead of buying one, you can join a carsharing service.

Own a set of wheels? You can still share them. We’re seeing a proliferation of new peer-to-peer carsharing services like RelayRides, Spride Share, and WhipCar, which let you rent your car directly to strangers or share a single car among several friends. Let’s say, for example, that you’re visiting Cambridge, Mass., for a day and need a car for touring the city. You’d look at the RelayRides website, find the nearest participant who is renting out her car, check availability and reserve the time, and then go get your ride. There are also many new companies—such as Avego, Zebigo, and Carticipate—that connect carpoolers over the Internet.

The environmental benefits of carsharing are enormous. Research by the consulting firm Frost & Sullivan estimates that, “on average, each shared vehicle replaced 15 personally owned vehicles in 2009 and carsharing members drove 31 percent less than when they owned a personal vehicle. These two factors translate into 482,170 fewer tons of CO2 emissions and less travel congestion in urban areas.”

2. Invest in the sock exchange

My wife walked into a laundromat seeking change for a dollar, and there she discovered the “sock exchange,” a board where customers pin single socks for anyone to take and match. Such gestures make city living more fun, and they suggest another way to live, where resources (like socks!) are conserved and shared.

One person’s trash really is another person’s treasure. Score and swap, for free!

There are lots of ways to share your old duds or get your hands on someone else’s recycled fashions. In addition to conventional routes—buying from or donating to Goodwill—you can swap clothes online at sites like thredUP and Freecycle. At thredUP, for example, participants list what clothes they want to share on the company’s site and exchange items through the mail.

Clothing-swap parties are easy to organize and are becoming popular throughout the country—round up your old clothes, invite your friends over, and swap apparel. In New York, a group called Score! organizes mega-clothing exchanges and parties across the city. They bring DJs, artists, and fashion photographers to take pictures of attendees in their “scored” outfits.

3. Know how to do something? Trade it.

Are you an expert on homebrews, bicycle repair, or mending clothes? Teach your skills to somebody else and learn something from them in the process.

Brooklyn Skillshare in New York organizes meet-ups where people share their personal expertise. “Everyone really has something to teach and something to learn,” writes Meg Wachter on Shareable.net. “The seeds for the Brooklyn Skillshare began in the spring of 2009 when I attended a similar event in Boston and was inspired by the weekend-long workshops offered on a regular basis, free of charge.”

Another Brooklyn-based project, the Fixers’ Collective, brings neighbors together once a week to help each other fix broken goods that would ordinarily get thrown away.

And as long as you’re sharing skills, why not also share stuff on a ­community-wide basis? Share Tompkins, a volunteer-run group based in Ithaca, N.Y., organizes monthly Community Swap Meets. “People give away and barter everything from homemade apple butter and original art to music lessons and massage,” writes Shira Golding on Shareable.net. Beyond the tangible activities, writes Golding, “We feel we are contributing to the creation of a social fabric rich in giving and sharing.”

It’s such a simple, fun thing, and yet through neighborhood-level activities like skill shares and swap meets, I think we can glimpse another, even more shareable society.

Jeremy Adam Smith wrote this article for A Resilient Community, the Fall 2010 issue of YES! Magazine. Jeremy is the editor of Shareable.net, author of The Daddy Shift, and co-editor of two new science anthologies, Are We Born Racist? and The Compassionate Instinct.Re-posted by permission. Header photos by Shira Golding. Home page image by Murielle29.

Jeremy Adam Smith
Jeremy Adam Smith is the editor of Shareable.net, author of The Daddy Shift, and co-editor of two new science anthologies, Are We Born Racist? and The Compassionate Instinct.