What Would Make Cincinnati a Great City?

What would make Cincinnati a great city? To explore that question, more than 100 folks from around town gathered with Peter and John to learn about “The Abundant Community.”

There is growing buzz around town about civic engagement and how we could better engage with citizens in the process of developing Cincinnati.  Cincinnati’s new comprehensive plan, PLAN Cincinnati, was the result of several years of extensive engagement opportunities with citizens.  Moving now into an implementation phase, this evening was targeted toward folks who are investing themselves in the detailed tasks of bringing about the future Cincinnati articulated in the plan. 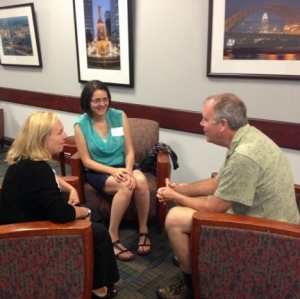 The evening was hosted by Civic Engagement Works, a small team of folks actively working to foster civic engagement skills in a practice environment.  Practicing their engagement skills included reaching out to enlist the City of Cincinnati and Xavier University’s Community Building Institute as co-sponsors.  Together they leveraged multiple distribution networks to invite many of Cincinnati’s progressive-minded civic activists.  The result is an emergent base of folks who are growing in understanding and experiencing the power of true civic engagement and the centrality of the neighborhood in creating an abundant community.

Much work remains ahead.  It is hoped that this evening sparked some interest in exploring new ways of reaching out — reaching out from city hall to neighborhoods and reaching back to city hall from the public.

Gary Robbins
Gary Robbins is a member of Cincinnati Civic Engagement Works, a community of practice that hosts regular gatherings to learn, develop and practice the art of civic engagement and to expand its network of practitioners.