12 Thoughts on Inclusive Community Building for 2016

When we lose the ability to care for our neighbours, we also inadvertently chart a course towards a future wherein that carelessness becomes our inheritance.

Neighbourliness is embodied in the practice of welcomiReflectionsng the stranger at the edge, and the stranger living in our midst, all year round.

Building communities of hospitality is the single most important act of our time; it is also the most neglected.

The seeming absence of hospitality for isolated people, should not be misconstrued as the actuality of things, but rather as a reflection of the untapped potential of things, and the consequence of a crucial mass of us making the assumption that when it comes to caring for our young people, older people, people on the margins, ‘it’s someone else’s job, someone with the right qualifications’.

The art of hospitality – opening up space for people who have been excluded, but also reawakening those parts of us that have been rejected – is a way for people to exercise personal agency and stewardship, and so it liberates the host as much as the one who is being hosted.

True hospitality is reciprocal, and not an act of charity.

The work of building community requires everybody’s contribution; a community that does not have space for labeled people, has space for no one.

Professional helping systems are unintentionally masterful at setting rules that break relationships. Tragically the absence of such relationships breaks people.

Community is what makes us and keeps us well, safe and vibrant. 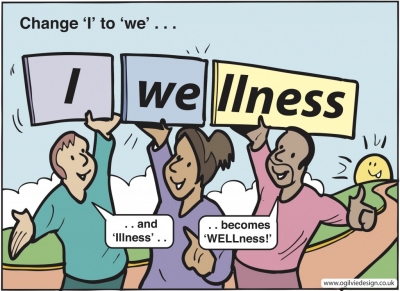 This illustration was part of Graham Ogilvie’s artwork created during some of Cormac’s sessions in Aberdeen. Our thanks to him and Aberdeen City Council for sharing them with us.

A significant amount of the money spent attempting to help people with professionally diagnosed ‘needs’ and ‘problems’ has prevented those people from sharing their gifts and living a life of their choosing. Hence denying them of their most basic needs/rights for belonging, autonomy, competence and security, and creating far greater and more impenetrable problems than they originally presented with.

Hence, instead of asking people ‘what is the matter with them?’ ask, ‘what matters to them?’ The former reveals the need for programmes, the latter reveals a yearning for life, and a huge reservoir of sleeping gifts. Wake up! It’s the middle of summer!

The pursuit of the good life is a cry of freedom, the echoes of which bounce playfully between friends and neighbours in a dance of interdependent living. Reducing dependence on institutional life can only happen when we increase interdependence in community life.

This is not to say that agencies are off the hook. They need to spend as much but in a different way, instead of growing their client numbers, they will need to invest in grow the connectivity of community.

If professionals and their organisations are to avoid unintended harm in their efforts to be helpful, they must actively avoid doing anything that controls our lives, or decommissions our personal, family and community capacities and resources.

Ethical organisations support their practitioners to embody such theories of practice, and actively encourage praxis to ensure there is genuine accountability to the public that they are privileged to serve.

There are limits to what people can do using people power, often they require outside non-governmental, government and marketplace supports, in the shape of additional expertise, financial and other resources.

Where communities cannot unilaterally produce solutions or sufficient conditions, for a good life, then it behooves ethical professionals to listen carefully as to how they can use the assets of their institutions to enable greater participation and citizenship.

The most important question a professional can ask of themselves is: ‘What is it I can NOT do – to be helpful?’

Our strengths and the assets around us are not there to mask or correct our fallibilities andimperfectabilities.

Our fallibilities are a defining and joyful expression of our humanity; they are not meant to be ‘fixed’, or cured, nor should they be hidden behind a veil of shame and secrecy. To do so, is to close off the surest route into a community of genuine belonging, where reciprocity is the norm.

We each have a full half and parts that need to be filled. If we are to get better at being human together — since the parts that need to be filled are like an expectant Christmas tree, they provide the space for the gifts of others to be given and received — we need those parts who do both: the conceptual work and impactful practice.  Our fallibilities and those of others are therefore the royal roads to our gifts and our humanity. Where we fall, there will the treasure be found.

Cormac Russell
Cormac Russell is Managing Director of Nurture Development, Director of ABCD Europe and a faculty member of the Asset Based Community Development (ABCD) Institute at Northwestern University, Chicago. He has trained communities, agencies, NGOs and governments in ABCD and other strengths-based approaches in Kenya, Rwanda, Southern Sudan, South Africa, the UK, Ireland, Sweden, the Netherlands, Canada and Australia. In January 2011 Cormac was appointed to the Expert Reference Group on Community Organising and Communities First, by Nick Hurd MP, Minister for Civil Society in the UK which he served on for the term of the Group. Examples of recent work include: Leading all national sporting organizations in Canada, in conjunction with the Canadian Council for Ethics in Sport, to adopt a shared vision as to how sport can become an asset for community building. This is effecting significant changes in the structures of major sporting organizations but also at a local community level in terms of community empowerment and citizen driven development. Advising I&Dea in the UK on the development of an asset based approach to health and on addressing health inequalities in low income communities as well as how an assets approach can improve community health and well-being. Partnering with Youth Work Ireland on a national program involving hundreds of youth practitioners and thousands of young citizens to develop a strong culture of youth led initiatives. Working in partnership with the University of Limerick and Atlantic Philanthropies in Ireland to infuse an ABCD approach across the entire city of Limerick. Part of this process involved organizing an entire neighborhood to address issues of loneliness, fear and intimidation and to support citizen driven development. The long-term vision is of a city that puts citizens and communities in the driving seat, through processes of neighborhood organizing and bottom up planning and where services are organized in the way in which community is organized.