Cormac Russell on Change That Starts with Communities

By
Rob HopkinsCormac Russell
-
February 10, 2017
1361
0
Share
Facebook
Twitter
Pinterest
VK
WhatsApp
Cormac Russell was raised on the west coast of Ireland, and now lives in Dublin, although he spends much of his time travelling.  He promotes the idea of Asset-Based Community Driven Efforts, and while some of his work is based in universities, mostly it is based in communities.  We recently came across his TEDx Exeter talk (see below), and thought it might be good to have a chat…

So Cormac, what are Asset Based Community Driven Efforts?

The best entry point to it is to talk a little bit about the heritage of John McKnight and John P. Kretzmann. These two old community organisers, who latterly took up working with the universities, began in the 1980s to be really concerned that a lot of the relationships professionals had with communities were one way.  Largely the focus on the part of the professionals was very much on what was wrong with communities.

So they spent about four years in the 1980s travelling around about 300 neighbourhoods across 20 cities in North America, trying to hear people into expression really, and to hear people use their own words to describe what makes things better, or stronger, or more vibrant or healthier for them.  What local people described was what eventually became known as Asset Based Community Development. 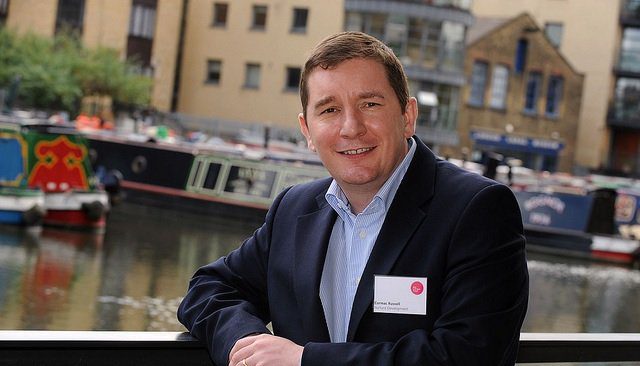 ABCD is not a model, or even an approach, so much as a description of what happens when local indigenous people come together and behave effectively in a way that’s about right relationships with each other, especially those who are on the margins of their community, but also right relationships with their environment, their culture, and their economy, and of course, the actual place—the neighbourhood or the village that they’re in, in the ecological sense.

After Hurricane Sandy, Noam Chomsky was critical of Occupy Sandy, who often reached communities before the first responders, saying this is a terrible idea because this is exactly what neo-liberals want, for us all to do everything so they can make the government even smaller. How do you view that tension?

Chomsky’s version of reality is obviously highly respected but I’m going to have to part company with him.  I think government, and even more evolved welfare states (I was in Denmark last week for three days), clearly at their best are an extension of us, not a replacement for us.

It’s important to say that there are certain things that individuals, families and communities can do that are irreplaceable, that there is no government proxy for. The difficulty with Noam Chomsky’s approach is that actually one of the things that people do really well, is to help each other in times of crisis. And to suggest that there’s a certain service or programme that does that better, to my mind, is actually neo-liberalism, because what it’s doing is it’s corporatizing and commodifying something that exists outside of contract, which is humanity, and our ability to come together and be better at being human together.

That’s not about service.  That’s not about programmes, that’s about mutuality, it’s about community, it’s about regard.  It’s about all the things that I would describe as care. At its heart is a belief that care cannot be managed, controlled, commodified, bought or sold.  Care is the freely given gift of the heart. So I’m not sure what he means by government in that sense, but my understanding is that primarily government does things that we cannot do ourselves.

And at its best it comes alongside us and also helps us to do things we can do by creating a dome of protection, making sure that outside corporate interests don’t destroy those impulses.  It also creates a democratic space whereby we can keep them honest and hold them to account and say, “This is what we’re doing, this is what we need your help to do, and this is what we need you to do first”.  So I think Noam’s version of democracy, actually for my money, is quite one-dimensional. 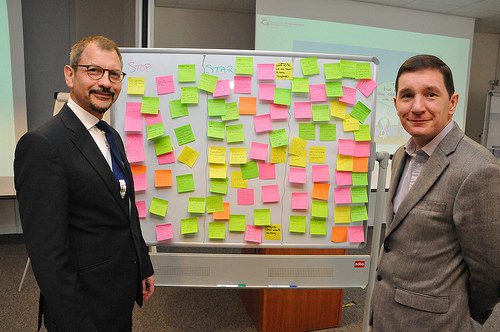 I love your term “a dome of protection around the inventiveness of local people”.  At the moment what seems to be happening, certainly in the UK, is that through austerity, the ability of local government to provide that dome, or the willingness of them to provide that dome seems to be contracting. What pressure can we bring to bear when that doesn’t happen?

This is probably going to sound a little bit counter-intuitive, but my sense of it is that there are three questions to be answered here.  The first really is in terms of getting a better settlement in the broader sense, what can we do ourselves that we don’t need help to do? How can we release, discover, connect and mobilise that inventiveness at civic level?

The second is what can we do ourselves but with some help from outside?  The third and the last thing to ask, once we’ve figured out the answer to those first two, is what do we need outside agencies to do for us?  My argument is that if we took on the austerity challenge, following that sequence, we would have a much more powerful negotiating position when it comes to a new settlement than we currently have.  Which largely I think is trying to mobilise people to act as consumers, albeit disaffected consumers, to get a better settlement from the government, who are treated as the exclusive producers.

If that’s the case, then I think that co-production can only happen when the community from grassroots up defines what it can do, and then finds out from doing that, from flexing its own civic muscles, what it needs from outside.  So if I was to simplify it, I would say communities can’t know what they need from outside sources until they first know what they have themselves internally.  My fear is that we’re getting that the wrong way round.

At its best, government comes alongside us and also helps us to do things we can do by creating a dome of protection.

What’s your sense of the kind of resources and approaches and tools that we need to take to really engage those ‘left behind’ communities who may have voted for Brexit?  How to take those community engagement approaches and ideas that often resonate more in middle class places, and to embed them more widely?

If we take as sacrosanct and non-negotiable this idea that we’re paying into a shared pool, you know, in terms of tax, and that we expect that that would be distributed in a way that gives everybody a fair crack of the whip – that’s a given, that’s the irreducible minimum of a just society—one of the things that’s happened in the UK is that we’ve immediately leapfrogged into the only way to distribute that wealth is to give people services and programmes.

The whole narrative is around, “we’re not going to accept cuts to our services and programmes.” That’s fine insofar as it goes, but there are other ways that we can distribute wealth that would actually enable communities, regardless of whether they’re low income or high income, to include everybody.

I’ll give you a for instance of this just to ground this a little bit, and this comes from the capital of neo-liberalism, the United States. The GI Bill of Rights is a really interesting policy piece, which in a way created a dome of protection around poor service men and women who returned from the Second World War.  But it didn’t do it by giving them goods and services.

They created government bonds effectively which gave these folks down payments on houses when they returned to communities, enabled them if they wanted to return to education to choose their own programmes, rather than go to the ones that were prescribed for them, and gave them the resource to set up their own business if they wanted to.

Now ironically today, many of those people who received those kinds of supports from the state, would think about themselves as self-made men and women, and possibly even voted for Trump. The state did such a good job supporting their inventiveness and their creativity and imagination, they don’t even remember that they were supported by the State.

Communities can’t know what they need from outside sources until they first know what they have themselves internally. My fear is that we’re getting that the wrong way round.

The interesting thing is that we all know that rich men start wars, and poor men fight them. So beforehand many of these men were seen by the State as welfare recipients. They go, they fight a war, and by some social alchemy, they come back and they’re heroes, and because they’re heroes, the State passes a policy that treats them like people of value, making them of value to their economy and their community, and nobody bats an eyelid.  But when you’re a poor person, somehow, those policies are different.

What often happens is we get sandwiched between the right and the left and it becomes almost impossible for us to talk about, “Well, as well as the individual, and the institution being units of change, our neighbourhood is a unit of change.  It’s a dynamic, breathing, productive place, which actually has the space to take rich and poor and a whole range of people with real challenges in their lives, and liberate some of their inventiveness, as well as meet their needs.”

This is what I think permaculture teaches very well, that when we try to elementalise that conversation, and just talk about one part, invariably we create polarisation and partisanship. This is why so many people now are rejecting the left/right schism, and people are beginning to find new ways of expressing themselves that are collective, about collective effort and not just self-expression, or self-consumption.

Rob Hopkins
Rob Hopkins is an independent activist and writer on environmental issues, based in Totnes, England. He is best known as the founder and figurehead of the Transition movement, which he initiated in 2005, and has written four books in support of Transition: The Transition Handbook (2008), The Transition Companion (2011),The Power of Just Doing Stuff (2013) and 21 Stories of Transition (2015). For more on Rob and his work, start here.

The article below concludes Nonprofit Quarterly's series—Narratives to Build Collective Economic Power—which NPQ is publishing in partnership with the national racial...
Latest Thinking

Losing by Playing the Blame Game

A Deep Dive into the Art of Neighboring

The Light of Truth

What brings you joy?

25 Ways to Love Your Neighborhood