Being a freelance has unusual perks — like being able to choose your office space for the day on a whim. Lately, I’ve been trying to plant myself in “third places” — spots that lend themselves to interaction among community members.  I’m especially pulled toward places a bit off the “beaten path” for people in my social group.  That is, where are spaces of hospitality and human gathering where I’m likely to meet people outside my ethnic, income and general “identity” group? 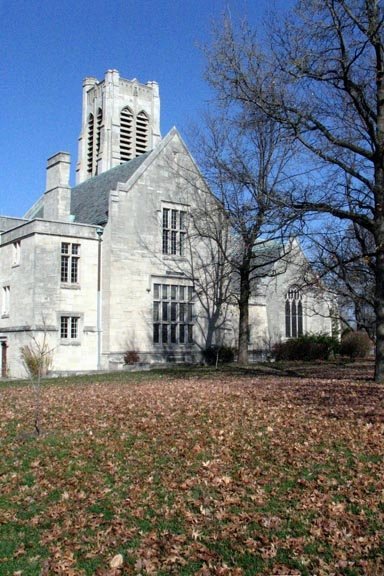 Today, after a morning conversation over tea at the lovely local joint Foundry Provisions with my newfound friend and fellow Storyteller Dawn, I decided to set up camp where I’d been most recently invited: an old favorite, Broadway United Methodist Church.  Located in Mapleton Fall Creek neighborhood [of Indianapolis], this unique hub and home for neighborhood, economy and community innovation was originally responsible for turning Indianapolis into a magnet for my heart.

More than a place, Broadway is its people.  They include my colleagues with the ABCD Institute, faculty members Mike Mather and De’Amon Harges, plus expert connectors, healers, teachers, artists and many more who live in the neighborhood or work within its walls (and sometimes they do both). With its innovative approach to tackling issues such as poverty through discovering, celebrating and creatively investing in the gifts of neighbors, Broadway has been celebrated by folks as famous as urbanist Richard Florida and community-building thought leader John McKnight. (Interestingly enough, it remains pretty off-the-radar of many people I have met who here in Indianapolis who care about community, social justice and change).

Every visit to Broadway offers me a living lesson in both the challenges and the benefits of switching our lens from seeing needs to seeing gifts, and in valuing people and community as solutions to local issues –– rather than seeking  programs and institutions.

Today, in addition to the much-needed hugs, smiles and “How have you been?”’s I got just by walking through the lobby, I also got two of my other favorite things: FOOD (Taco Salad), and a chance to invest in someone’s gifts.

My choice of space came thanks to a fresh invitation yesterday from friend, artist and organizer Terry Martin to come use the third floor “Art Room” whenever I want.  It’s now used primarily by the amazing artist Alkemi Bayete (aka Michael Jordan), and I was happy to find that wi-fi works just fine up there.  It was great to be surrounded by Alkemi’s brushes, canvases, finished and unfinished art — and just the energy of creative ideas. . . .

But I soon found myself recalling the wonderful aroma that filled the hallway of Broadway’s main entrance when I’d first walked in.

This is Miss Frances. 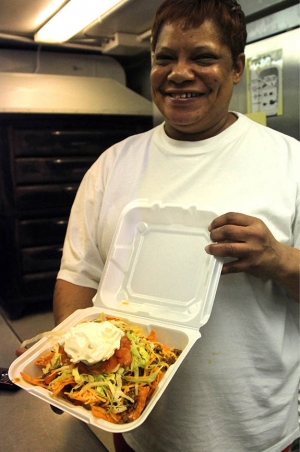 Ever since Broadway discovered that she’s a gifted cook, Broadway’s been finding ways to use her gift and help build neighborhood economy at the same time. Frances catered a number of get-togethers, then one summer, church staff realized how much sense it would make for her to set up shop in the church kitchen cooking lunch every weekday for purchase from staff and from the neighborhood kids who were participating that summer in the Roving Youth Corps project. The kids would be walking down to the gas station anyway, so why not have food here and keep the money right here in the neighborhood?

Since then, the aromas of Miss Frances’ cooking waft up from the kitchen and greet anyone who comes into Broadway’s double doors.  You can come by any weekday between 12 and 3pm to catch her and place your own order. Today, she was serving up dinners of chicken noodles ($7) and lunches of cheeseburgers or taco salad for just $5.

In truth, I have food at home and could have cooked for myself.  Also, today’s Taco Salad deviates from the kind of diet I’m trying to follow.  But there’s something magical to me about taking the (currently) small bit of cash that I have and investing it in another hyper-local business — Miss Frances — for my lunch.  Because her operation is so small, my investment makes that much more of a difference.  The exchange is also that much more human and satisfying to me.

It’s this richness that I crave, come to Broadway for, and want to create around me in my own neighborhood and community — an attentiveness to and resulting space for seeing, using and investing in the gifts of those around me.

Excerpted and re-posted by permission from Aprilart Studios. For the complete post and many more photos visit http://www.aprildoner.com/wednesday-at-broadway/. Photos by April Doner.

April Doner
April Doner is a community connector, artist, and mother who is passionate about igniting the intersection between re-weaving neighbor relationships, strengthening local economies, and healing / reconciling inequities and injustices. She is a Steward at the ABCD Institute DePaul University and, while not practicing neighboring in her own neighborhood, she trains, coaches, and consults in Asset Based Community Development. April also documents local resilience as well as group processes through various creative means including writing, photography, video, and graphic recording. Since 2020, she has curated content for AbundantCommunity.com.